My thanks go here to Dr Sandra Claxton who taught me a great deal about tardigrades (actually, she taught me just about everything I know!)


Occasional and skippable one-paragraph commercial announcement: the microscopy material appearing in this blog at the moment comes from out-takes from an upcoming book.   Once you have read this, you will see why we decided to leave this bit out of Australian Backyard Naturalist (which by the way, you don't need to buy or read to follow any of this).

The thing is, this sort of work is advanced stuff, because these animals aren't easy to find: the biggest tardigrades are 1 mm long, the smallest are only 0.4 mm (400 microns). That means you probably won't see them without a hand lens, and you certainly won't see any real detail without a microscope, but tardigrades are everywhere. 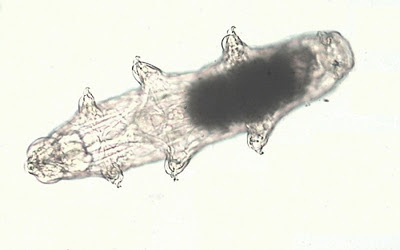 Even under x20 with a dissecting microscope, tardigrades are small wriggly blobs, just visible enough to pick up with a brush or a needle, to transfer onto a well slide.

Under a high-power microscope, you will be able to see that they have eight legs, each one usually ending in a claw: only the soil tardigrades are clawless.


Sometimes, the two hindmost legs may be curled up under the body, but after you have seen a few tardigrades, you will learn to recognise the curved claws on the legs. The individual shown here has its two hind legs almost hidden.

The name 'tardigrade' means 'slow walker', but their common name is 'water bear'. Tardigrades are found almost everywhere, from high mountains to deep in the sea, but the easiest ones to catch are the ones that live on or under the bark of trees or among lichens and mosses. You can also find them in leaf litter sometimes.

Some tardigrades drink the juices from plants, but others are hunters, and experts can tell the hunters at a glance, because they have a big pharynx. Tardigrades eat mosses, fungi, protozoa, nematodes, rotifers and even other tardigrades.

Tardigrades are hard to classify, but they seem to be a sister group to the velvet worms and the arthropods. They have no respiratory organs, because they are small enough just to absorb oxygen through their skins. They have a 'straight-through' digestive system, and under the microscope, you can usually see their digestive glands, but not much else.

What you need:
A tree to scrape bark from, a paint scraper, a jar, a coarse sieve, a fine sieve, a wash bottle (see my last post in this blog) some containers and a dish.

What you do:
Scratch some bark fibres off a tree with the side of the blade of a paint scraper, or gather up some moss or leaf litter. You have probably just collected your first tardigrades. Leave this material to soak in water overnight to knock the tardigrades out.

Summary: sieve the damp bark in a coarse sieve. Wash it with a wash bottle and discard the large stuff in the sieve. Take the material that went through the sieve and run it through a cloth sieve to get rid of fine stuff. The tardigrades and similar-sized fragments are on the cloth and can be washed into a jar. 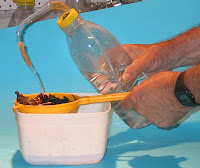 Run the water and bark through an ordinary kitchen sieve, and catch the water in a jug. The tardigrades will now be in the jug, but separated from the big bits of bark.  Note that my "jug" was an ice cream container.

Leave the jug to stand for 30 to 60 minutes, and then strain the water through a 40 micron mesh. If this is hard to get, use a square of an old silk blouse or even a piece of linen. A piece of stocking or pantihose is too coarse, at around 400 microns, the size of a large tardigrade, but even that will catch some, if it is not stretched too tightly. 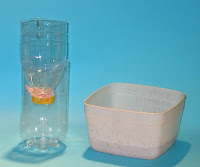 I have a trick for making filters: I use a wood chisel and a hammer to cut out the flat top of a screw cap, in order to make a sieve funnel: look at the picture above, and the one to the left to get the idea, but I will come back to this trick in a later post, because it can be used for all sorts of things.

Note inserted October 2014: that post has finally been written, and is online. 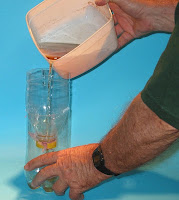 This second stage separates the tardigrades from the really small stuff in the water.

Then you need to wait patiently as the water goes through, leaving a glug of plant fragments and hopefully a few tardigrades on the cloth. 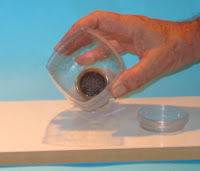 The end result after straining is complete. 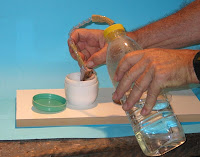 Then you turn the sieve over and run some water the other way, to wash the tardigrades and anything about their size off the sieve and into a small amount of water. The best way to do this is with a wash bottle.

After that, you just need to search carefully through the remnants in a shallow dish, to see what you can spot moving around. Expect to find all sorts of surprises in there, along with the tardigrades, including large protozoa, nematodes and small mites at the very least. Leave the dish completely still and look for any movement in and under the bits of litter and sand grains. At first, you probably won't see the tiny wriggling shapes without a microscope, but once you know what to look for, a good hand lens will reveal the larger tardigrades.

Another way of catching them

A 'Dust Buster' or other portable vacuum cleaner can save you a lot of work. Fit one with a clean bag and use it to sample tree trunks, lichens and moss mats near waterfalls. You can use it to pick up mites, springtails, beetles, flies, bark lice (book lice) and small spiders. Ian Kinchin, who invented this method, said it was particularly useful on tardigrades.

You need to have a white dish or ice cream container, large enough to let you shake the vacuum cleaner bag into it, banging it with your hand to shake off any small passengers that are hanging on. Then tip the contents of the dish into a holding jar.

In my attempts so far, I think I have used moss that was too dry, so I only got small numbers of mites from the moss. One day, I plan to try two things: first, I want to choose a moss mat and clean it of all twigs, and then 'vacuum' it after rain; second, I want to try watering a moss mat with bottles of water, waiting a few minutes and then 'vacuuming' it. One day, maybe, but you can always beat me to it: if you do, please post a comment here.

Tardigrades are tough! You can find them 6000 metres up mountains and 4000 metres down in the oceans, and on the ground, all the way from the poles to the equator. They can survive being frozen below -200° C for several days, they thrive in boiling hot springs and they can even be heated to 151° C for several minutes. They can also live for a century without water, and for longish periods without oxygen, even in a vacuum, and they can survive huge doses of radiation. People used to say that after a nuclear war, only cockroaches would be alive, but the tardigrades will do even better!

And the moss mat flushing method 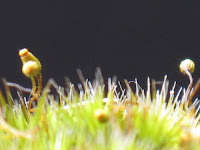 In a very real sense (as you will see, once you think about scales), the moss mat is a sort of uniform jungle, though the shot on the right also shows a couple of capsules, the devices from which mosses release spores that can blow around and carry the moss genes to a new place. 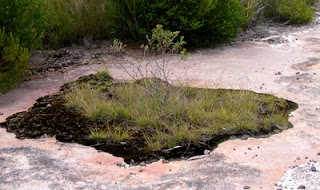 In many places, like this bare sandstone slab, to the north of Sydney, a moss mat may be the only cover around. There will be something living there, though probably not much.  Moss growing near a stream or a waterfall or even in a damp alley is a better source.

To catch them, you need a good light source, a Petri dish or a saucer, some moss and some water and/or 70% alcohol. I prefer using just water, so the animals live and I can release them later. The alcohol would kill them.

If you slowly add water to a moss mat in a bowl, some of the animals will climb up into the dry. Adding 70% alcohol with an eye dropper has the same effect, but you need to watch out for fire, and avoid breathing the fumes.* Do this in a flat white dish in the open, pick up the animals with an eye-dropper, and put them in a large amount of fresh sea water to reduce the risk to them—and you!

Remember that tweezers are bad news for animals. You should use a paint brush to pick up any animals you want to mount on a slide for closer examination, and always use well slides to avoid crushing the animals.

* By the way, a small amount of methylated spirits in some sea water will flush all sorts of animals out of dried seaweed on a beach.  I will come to that, some other time.

(started April 2015)
My thanks to Thomas Boothby (see comments below) who drew my attention to ISTH, the International Society of Tardigrade Hunters. This is an excellent place to go, and you will get real experts there, as opposed to this fumbling enthusiast.
* * * * * * *
This blog covers quite a few different things, so I tag each post. I also blog about history, and I am currently writing a series of books called Not your usual... and the first two have been accepted by Five Mile Press, The offcuts appear here with the tag Not Your Usual... . For a taste of Australian tall tales, try the tags Speewah or Crooked Mick.   For a miscellany of oddities, try the tag temporary obsessions. And language is covered under the tags Descants and Curiosities, while stuff about small life is under Wee beasties.