An unexpected change of direction

Any careful reader of this blog will realise that I sometimes diverge into history.

I am not an historian: I am a story-teller, but in history, there are just so many stories to tell.

Right at the moment, I have been side-tracked. With a new book due out in eight days, my publisher has thrown a "quicky" at me.  The history of Australia in about 120 chapters of 750 words each, before the New Year.  I am now busily writing my way into this by tackling one of the most difficult portions, the story of Australia in the Great War, or World War I.

Now I do military history fairly well: I even get awards for it, from time to time, but I'm not that keen on doing it, because there are too many sad stories to tell. 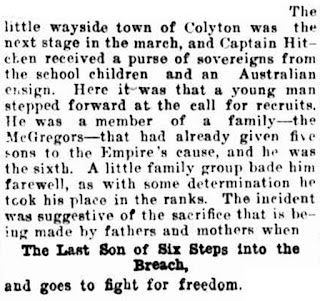 I have just clipped one bit from a newspaper story: you can see it on the right or you can read it in The Cumberland Argus and Fruitgrowers Advocate (Parramatta), Saturday 13 November 1915, 11.

This is why I am not that keen on writing military history.

Mind you, I made that pretty clear when I blogged about a poem called My Son, some months back. Am I being discourteous to the memories of those I write about?  I don't think so, because I believe that they went to war to make the world a better place for later generations.  If we know what went on, perhaps we can make some improvements without people having to die.

Oh, and for those who have been asleep, here's the new book, out in all good bookshops on October 1!  This one is written for Big People. but it is a spin-off from Australian Backyard Naturalist, inspired when I saw all the mouth-watering stuff at the National Library of Australia that wasn't usable in ABYN.

And now, I will replace my nose on the grindstone.
Posted by Peter Macinnis at 14:52 No comments:

I'm back on deck 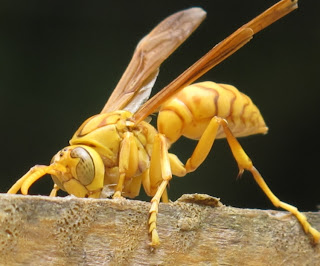 Just that: I haven't slipped between the cracks or fallen off my perch.  I'm just a bit busy.  Something more substantial in a day or two.

This is a nice wasp from Vanuatu, which is completely irrelevant, but which may distract you from my lack of activity.