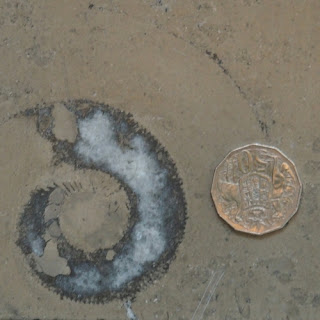 No, not bushfires, silly, though as readers of my new book Survivor Kids: get Ready for Wild Australia (released April 1, 2020) will learn, I used to light bush fires for research, under very tightly controlled conditions.

(I was a junior research assistant, supervised by senior scientists, and one of them did the actual lighting. Each day, we had tankers, up to 30 crew, knapsack sprays and tools, and the work we did gave rise to the present six-point bushfire danger scale.)

My recent silence is because I have been in New Zealand, playing with my grandkids and other kids, and thereby lies a tale of lighting a fire in the hearts of three anonymous children. 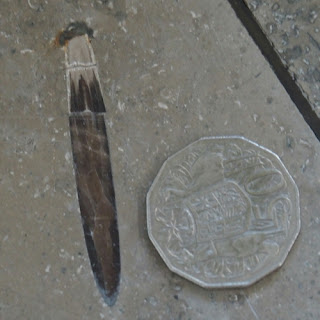 My wife and I decided to take in the Auckland Art Gallery, a superbly designed building with delightful Jura Grey limestone floors and stairs from Bavaria, all highly polished, and chockers with fossils.

Now as the people who travelled with me last year in Spain, Portugal and Morocco can attest, I keep my head down when on marble or limestone, watching out for fossils like the ones seen here.

(The second is a belemnite, an extinct squid-relative, the others are ammonites, and they are all from the Jurassic.) 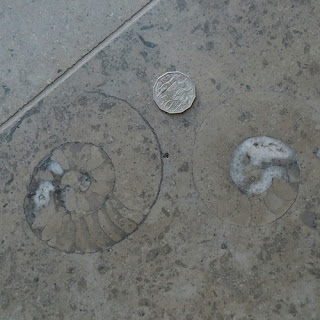 I always lay down an Australian 50 cent coin for scale: the coins are 32 mm across.

This often draws attention when people only see me picking up the coin after getting a shot, and I have been known to claim that it's a form of magic, but really, it's just for scale purposes.

Let me tell you, though, that joy is discovering that the floors and stairs at the  are of fossil-stuffed limestone.

True joy is finding a father and three children interested enough to ask what I was photographing. 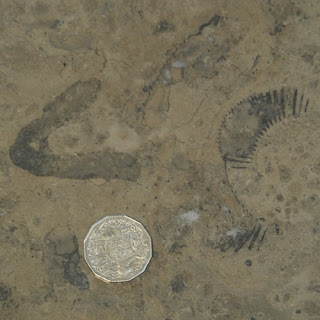 Sheer blissful joy is walking out the front door later to hear the oldest one, a girl of 8 or 9, giggling with glee at finding yet another fossil in the outdoor paving.


I think I won that one.


So yeah, my hobby is lighting fires.


And by the way, there's another book about to emerge as an e-book, previously announced as Not Your Usual Rocks. 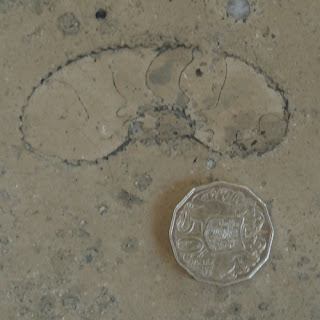 It now has a new name and is now called Mistaken for Granite.  It's for older readers and armchair travellers who prefer not to hike over 3 km of blasted heath in stinging rain, only to be lowered down into a volcano. We did that, for the sake of the book. 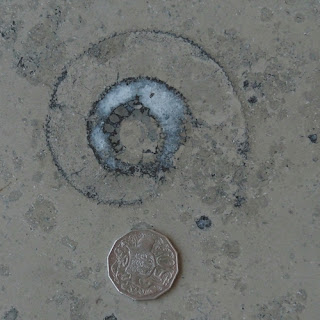