This is a sneak preview at a work in progress. These are all to be painfully short, because that's what the client wants.

In 1883, Richard Twopeny reported that Melbourne’s tree-lined harbour was pretty, but Yarra river was tiresome, because the steamer went aground every ten minutes, seemingly always close to a boiling-down establishment, where dead animals were rendered into tallow.

By then, these places were common, but they began during a very fierce drought in the early 1840s, many sheep died, and sheep that were worth forty shillings a head in 1841 went as low as one shilling in 1843. 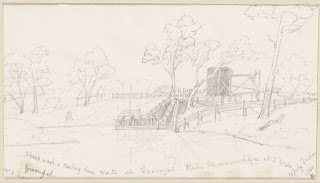 
Several people apparently had the same brilliant idea: kill the sheep and boil them for their fat, which was sold under the old name of “tallow”, which could be used in lighting, but also to grease the axles of carts and coaches, and even slow-moving steam engines. 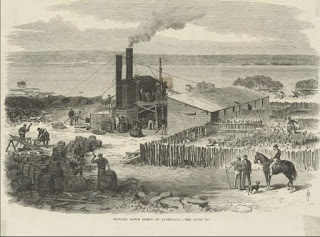 The smell was vile, and the view was worse, so regulations were brought in to stop new slaughtering establishments being erected within a reasonable distance of any incorporated town, while those already in existence had to be removed, M’Combie said. Judge Roger Therry recalled the smell later:

Sydney became for a time surrounded with boiling-down establishments at short distances from the city, and, in whatever direction one travelled, his sense of smell was revoltingly assailed by the tainted breeze wafted from these establishments along the road. — Roger Therry, Reminiscences, n., 228.

Toby Ryan credited, a John Hamilton, but it has to be said that Toby was an unusually unreliable witness (and this is a special case where a double negative is not a positive!):

[Hamilton] bought up a quantity of four hundred gallon iron ship tanks, and rigged them out so simply that the modus operandi astonished the people. Hamilton had seen a good deal of whaling operations and thus understood the matter. The establishment was in close proximity to wood and water, and could therefore dispose of one thousand bullocks per week, and the rush for boiling down became so general that he purchased or rented a large soap factory at Johnston’s Bay, Annandale, where he also carried on a wonderful trade, the stock still increasing. Tallow and hides-being then a good price, it returned to the squatter for good cattle 40s. to 50s. per head, and some extra good have even realised 70s. each, but that seldom occurred.
— James T. (‘Toby’) Ryan, Reminiscences of Australia, 157 – 9.

In the 1850s, excess animals were often boiled down, and the bullocks which had hauled wool bales to the cities were not worth taking back to the stations they came from, so they were boiled down, yielding around £3 of tallow each.

After the gold rushes began, of course, a lot of the surplus stick could be driven to the goldfields and slaughtered for a much higher return.