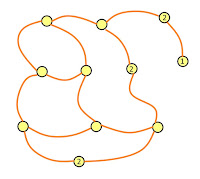 I am about to sign a contract for a new book which I want to be called Science Playwiths, because it originated in a long-running web site of that name. It covers STEAM: Science, Technology, Engineering, Arts and Mathematics. Here's a first sample, about curious number facts.
*
One estimate of the size of the entire universe puts its radius at 3 x 1023 times larger than the size of the observable universe. That is almost exactly half the value of Avogadro’s number, which every good chemist knows to be 6.022 x 1023. So what?
The speed of light in terafurlongs per fortnight is 1.803, close enough for government work to the metric equivalent of a fathom, showing that any measured value can be given almost any number by a cunning choice of units. Any reasoning based on the coincidence of two values needs to be questioned closely to see if the coincidence is just, well, a coincidence—or the work of somebody using peculiar units to get a result.
For example, the number of islands in the Hawaiian island chain is 137, and the ratio 1/137, often referred to as alpha, is the fine structure constant in physics. This value represents the probability that an electron will emit or absorb a photon. It is the square of the charge of the electron divided by the speed of light times Planck’s constant, and it is just a number: there are no dimensions or units involved at all.
The significance of alpha was first spelled out in 1915 by a physicist named Arnold Sommerfeld—at the time, measurement errors made the value closer to 136—and physics ever since has been littered with efforts to explain the number.
The most famous attempt was that of Sir Arthur Eddington, a prominent astronomer who believed that such constants could be used to produce a theory of the universe. He built a huge 16-dimensional equation full of these constants and claimed that alpha could be calculated from the number of terms: (162 - 16)/2 + 16, or 136.
Unfortunately, experiments quickly showed that alpha was really closer to 137. Eddington was not dismayed. He said he had forgotten to add one more factor, alpha itself, and made the value 137. For this, Punch magazine dubbed him Sir Arthur Adding-One.
Eddington was not deterred. Proudly he proclaimed that the firmament contains exactly (137 - 1) x 2256 protons. In 1938, he declared:
I believe there are 15 747 724 136 275 002 577 605 653 961 181 555 468 044 717 914 527 116 709 366 231 425 076 185 631 031 296 protons in the universe and the same number of electrons.
Of course, he may have been right; I have not yet been able to count them all, and it’s hard enough trying to find the value of 2256.
Posted by Peter Macinnis at 14:26